What Is Exposure Triangle In DSLR?

Thanks to modern technology, not only has it become a regular everyday thing to capture photos (unlike during the earlier generations when only film cameras were available), but more and more types of cameras are being developed to suit every aspiring photographer and photography enthusiast’s artistic style and needs.
Nowadays, cameras come in many different forms. These camera types include your favourite compact digital cameras, DSLRs, action cameras, new and improved film cameras, and even the latest mirror less cameras.
DSLR. (Digital Single Lens Reflex) A digital still image camera that uses a single lens reflex (SLR) mechanism. Most professional cameras were analog single lens reflex until digital SLRs emerged in the early 1990s.

In photography, exposure is a critical element that determines what is actually recorded on a camera's image sensor. In the simplest of terms, exposure for photographers refers to how an image is recorded by camera sensor and how much light is captured. Basically, it determines what the image you capture will look like.
The exposure triangle is the most fundamental concept of image capture, yet many people know little about it. Understanding the purpose and value of exposure is a must for photographers, particularly beginners who are serious about developing their craft.
So, what is the exposure triangle? Three settings control how bright our image will be: aperture, shutter speed, and ISO. We call this trio the “exposure triangle”. Each setting controls exposure differently. Aperture: controls the area over which light can enter your camera, Shutter speed: controls the duration of the exposure, ISO speed: controls the sensitivity of your camera's sensor to a given amount of light. Sensitivity is measured in ISO, ASA or Gain, depending on the camera.
Each setting also influences other image properties. For example, aperture affects depth of field, shutter speed affects motion blur and ISO speed affects image noise.When these three elements are combined, they represent a given exposure value (EV) for a given setting.

A camera's shutter determines when the camera sensor will be open or closed to incoming light from the camera lens. Specifically refers to how long this light is permitted to enter the camera.The shutter of your camera is the one you hear clicking or snapping. This is the sound that tells you that a photo has been captured.
"Shutter speed" and "exposure time" refer to the same concept, where a faster shutter speed means a shorter exposure time.Shutter speed's influence on exposure is perhaps the simplest of the three camera settings: it correlates exactly 1:1 with the amount of light entering the camera. The shutter speed is measured in fractions of a second, e.g. 1/100s. So, if you use the example given, 1/100s, what this means is that your camera sensor is exposed to light for only one hundredth of a second.

With waterfalls and other creative shots, motion blur is sometimes desirable, but for most other shots this is avoided. Therefore all one usually cares about with shutter speed is whether it results in a sharp photo — either by freezing movement or because the shot can be taken hand-held without camera shake. The best way to find out is to just experiment and look at the results on your camera's rear LCD screen (at full zoom). If a properly focused photo comes out blurred, then you'll usually need to increase the shutter speed.

A camera's aperture setting controls the area over which light can pass through your camera lens. The aperture is the opening found in your camera lens. If you look closely at the camera lens, you will find round or ring-like metal blades. These blades open and close: it opens to widen the opening, and it closes if you want the opening to narrow down. It is specified in terms of an f-stop value, which can at times be counterintuitive, because the area of the opening increases as the f-stop decreases.
Every time the f-stop value halves, the light-collecting area quadruples. There's a formula for this, but most photographers just memorize the f-stop numbers that correspond to each doubling/halving of light. The usual numerical values for the f-stop are 1.4, 1.8, 2.0., 2.8, 3.6, 4, 5.6, 8, 11, 16 and 22.
It differs from camera to camera compact camera might have an available range of f/2.8 to f/8.0, whereas a digital SLR camera might have a range of f/1.4 to f/32 with a portrait lens. A narrow aperture range usually isn't a big problem, but a greater range does provide for more creative flexibility.

The ISO refers to ratings that define the sensitivity level of your camera.ISO value is determined by numbers: the lower the number, the lower the sensitivity to light. Higher values mean it is more sensitive to light. Depending on your camera, the lowest value is 50, 100 or 200.
As the ISO increases, the presence of digital noise also increases. Digital noise looks like grain, and can be used artistically, often in black and white images, to give them a bit of grittiness. If you want grain, boost the ISO. If you want a clear image, use the lowest ISO possible. ISO (the sensitivity level of the sensor). Once you know how to do this, there's nothing you can't do. The choice of ISO enables you to use the optimum combination of aperture and shutter speed when the amount of light would normally prevent you from doing so.

Most digital cameras have one of the following standardized exposure modes: Auto (green rectangle), Program (P), Aperture Priority (Av), and Shutter Priority (TV), Manual (M) and Bulb (B) mode. Av, TV, and M are often called "creative modes" or "auto exposure (AE) modes."
Each of these modes influences how aperture, ISO and shutter speed are chosen for a given exposure. Some modes attempt to pick all three values for you, whereas others let you specify one setting and the camera picks the other two (if possible).

Photography is a lifelong journey. Workshop will arm you with the skills to start this journey confidently. Your photographs will be appreciated. And you’ll be part of a group of enthusiastic photographers with whom you can discuss photography, exchange ideas and travel around the world.
. 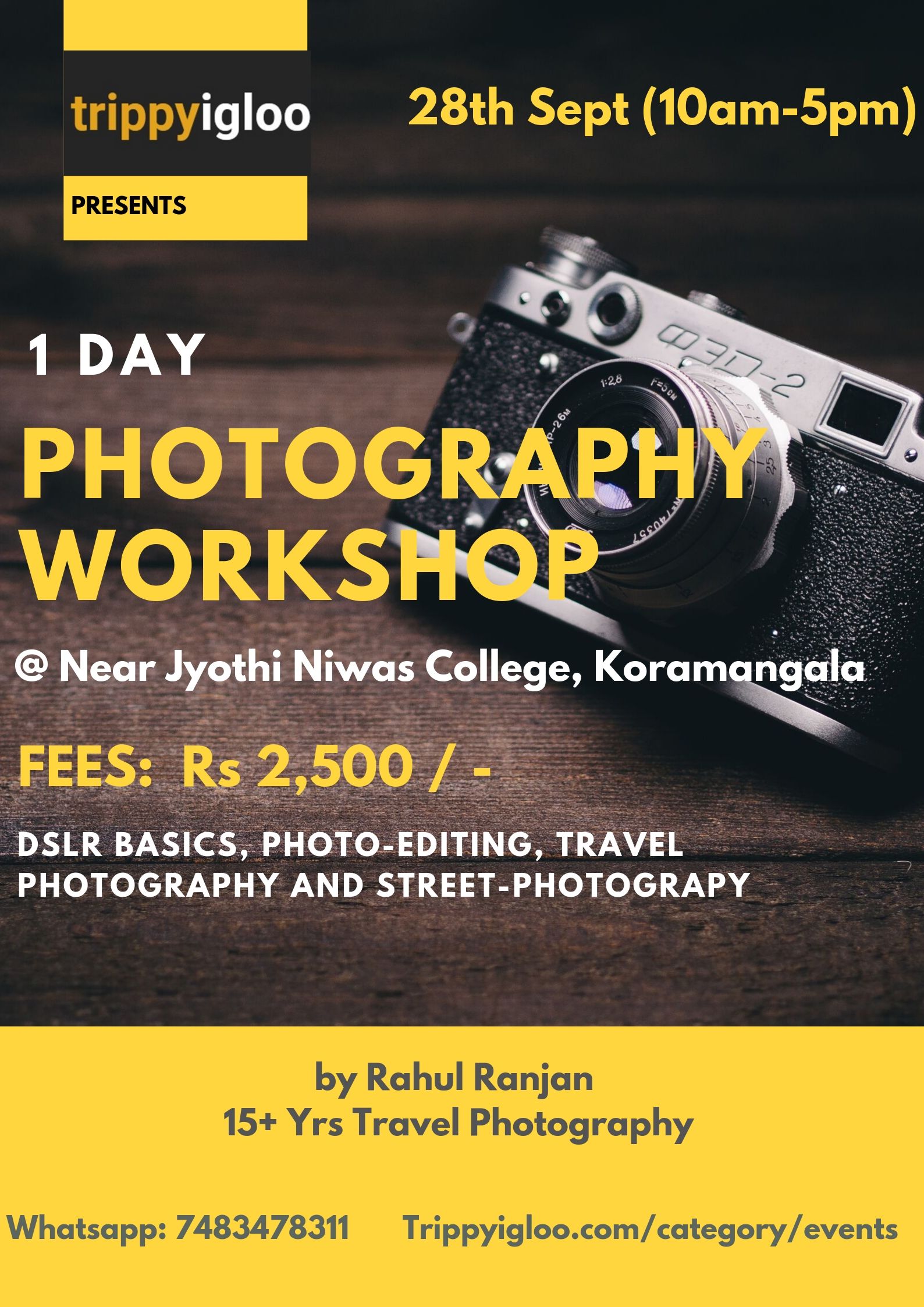 Trippyigloo.com presents a masterclass in photography & photo-editing. This workshop will include classroom training and practicals. By the end of thi... 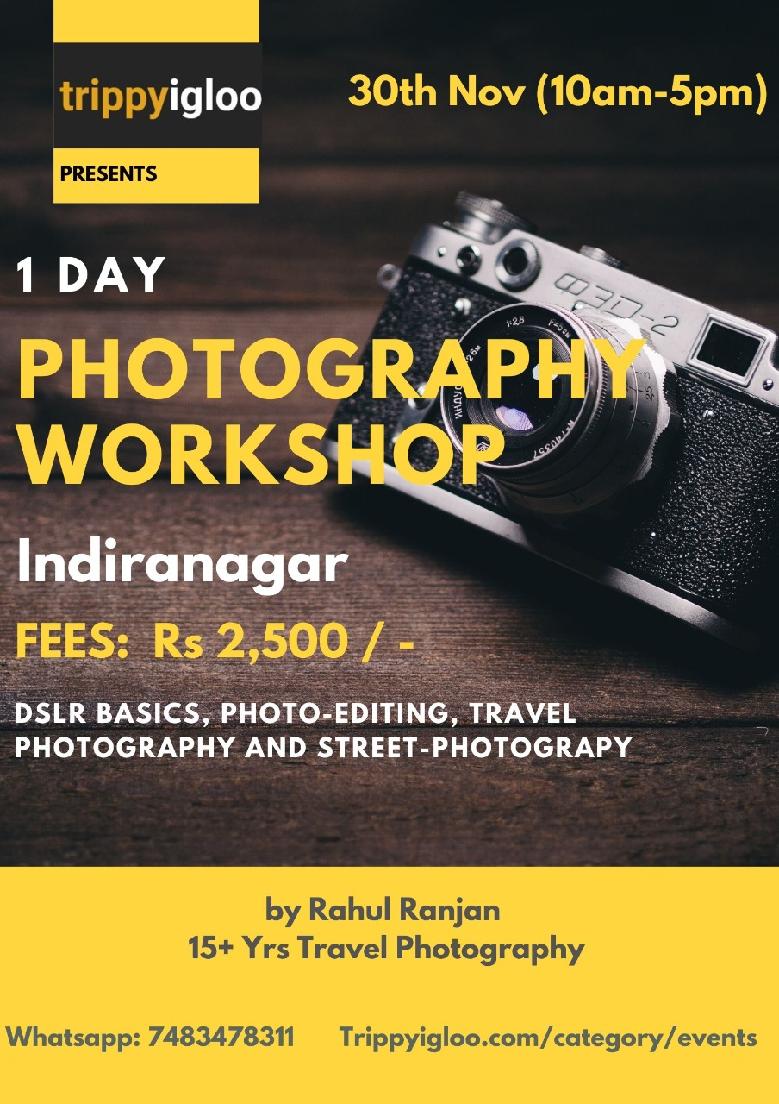 Trippyigloo.com presents a masterclass in photography & photo-editing by partnering 4 distinguished photographers and creative experts from the... 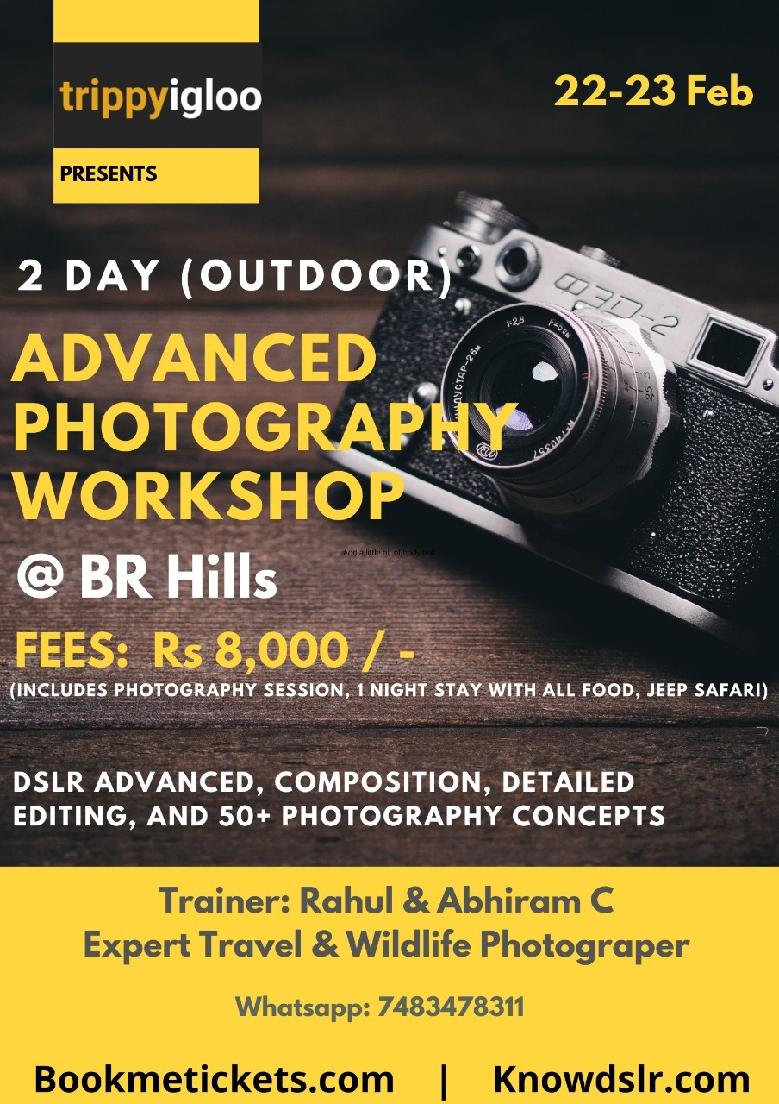 Trippyigloo.com presents a masterclass in photography & photo-editing. This workshop will include classroom training and practicals. List of to...

Thank you, we have received your enquiry!

We have received your message and would like to thank you for writing to us. If your enquiry is urgent, please use the telephone number listed on this page, to talk to one of our staff members. Otherwise, we will reply by email shortly.